Not a Neutral Topic for Me

May 01, 2017
NUVO arts columnist visited our studio a few months ago and I recently found this article. 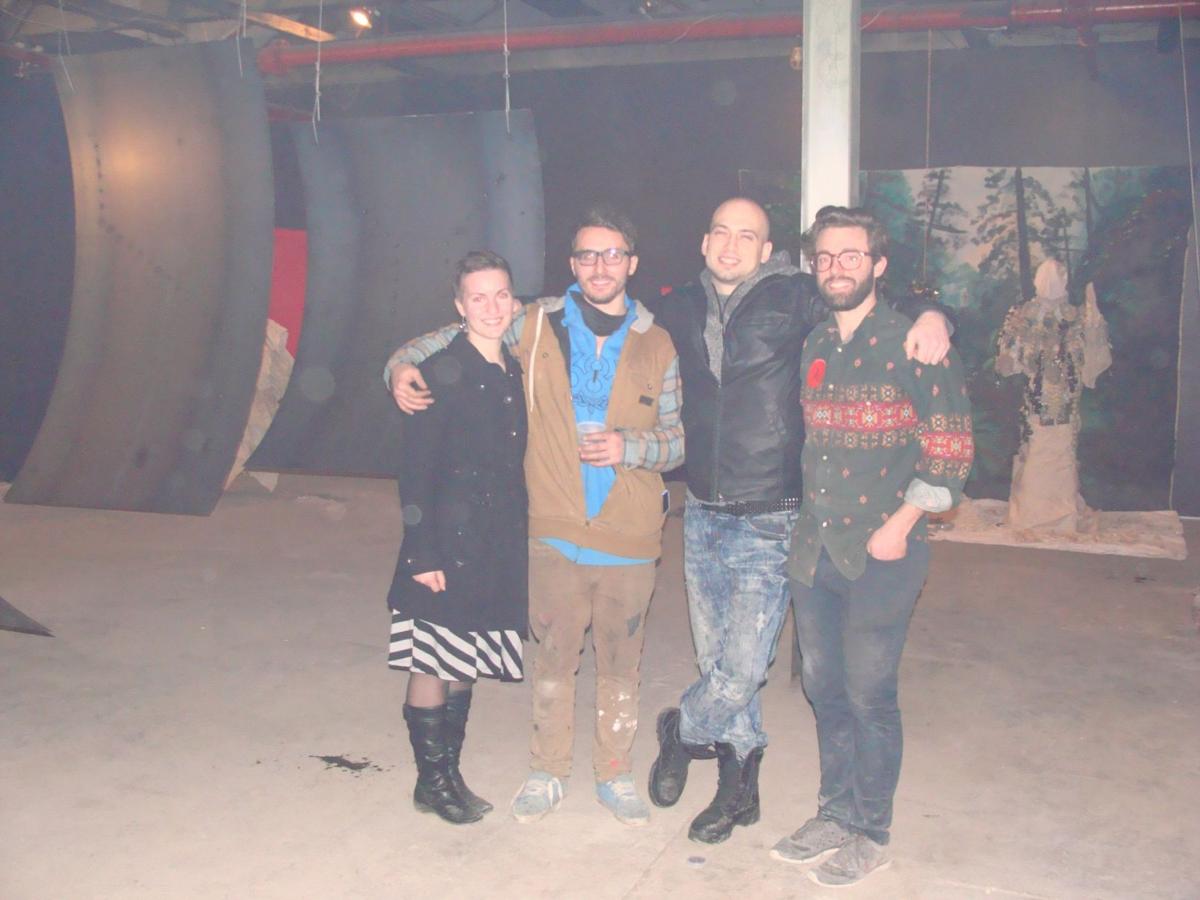 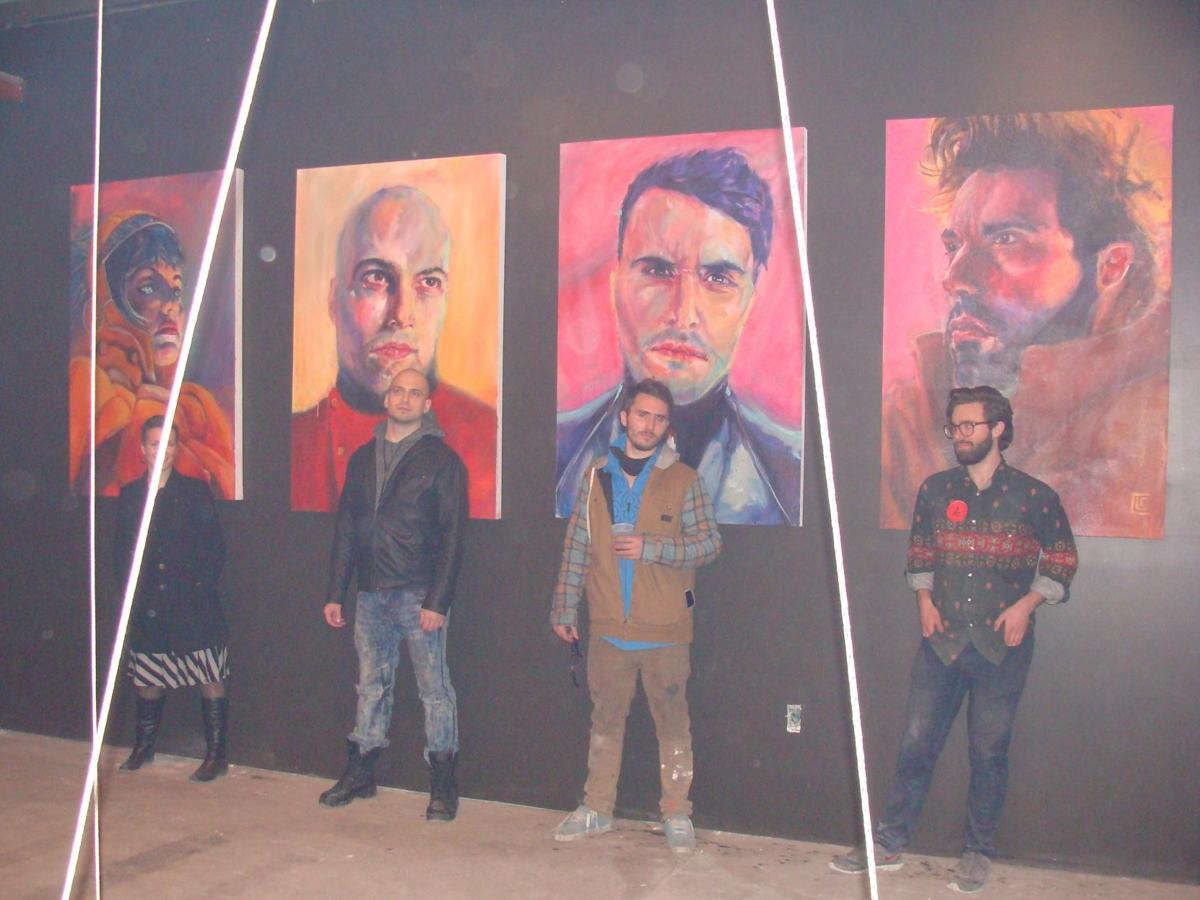 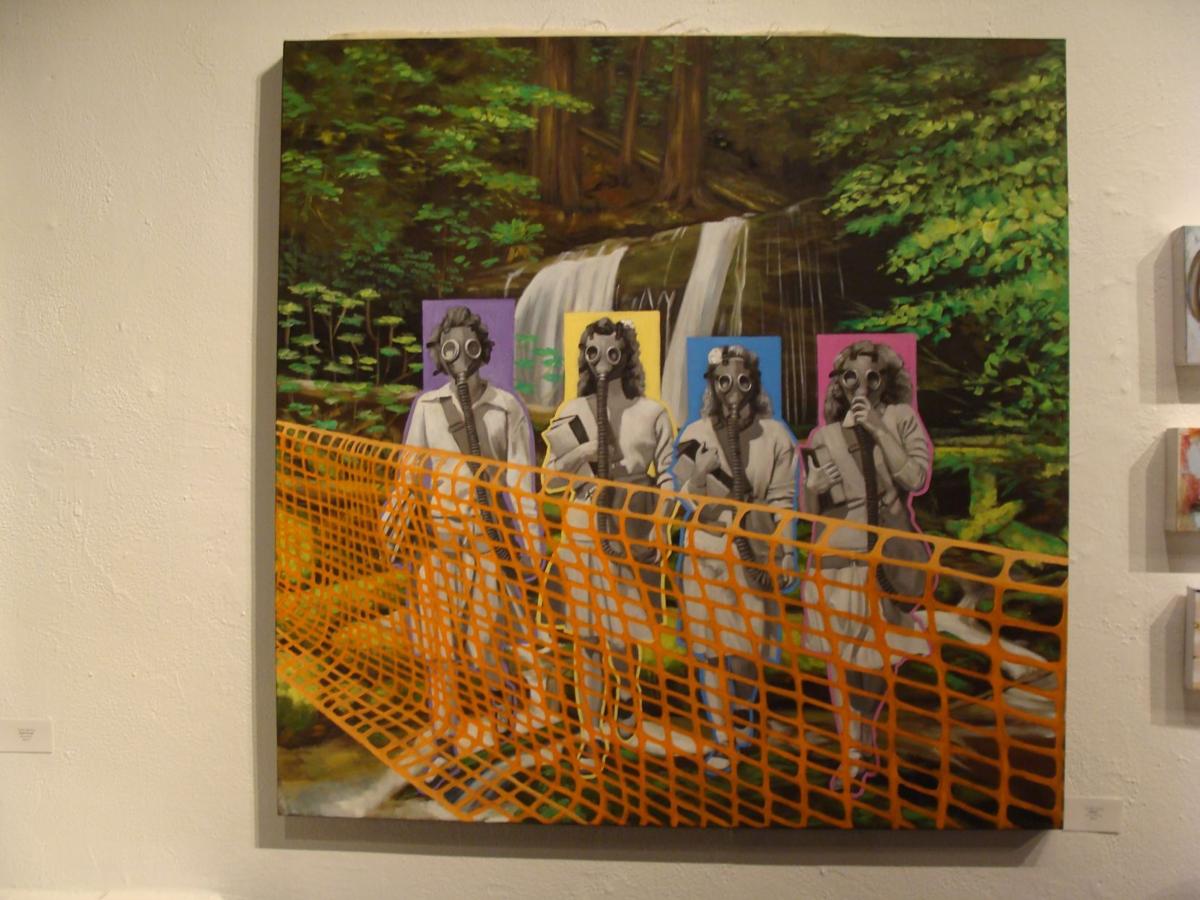 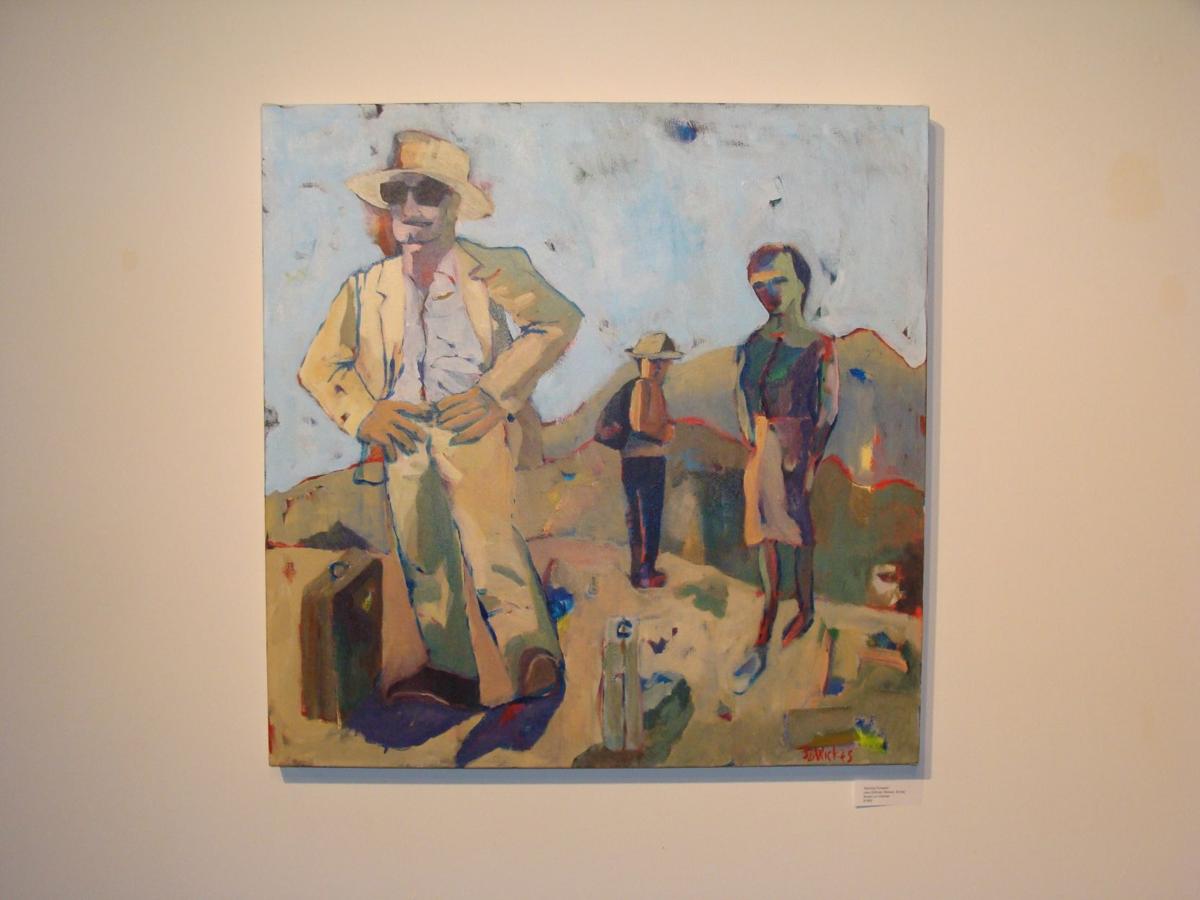 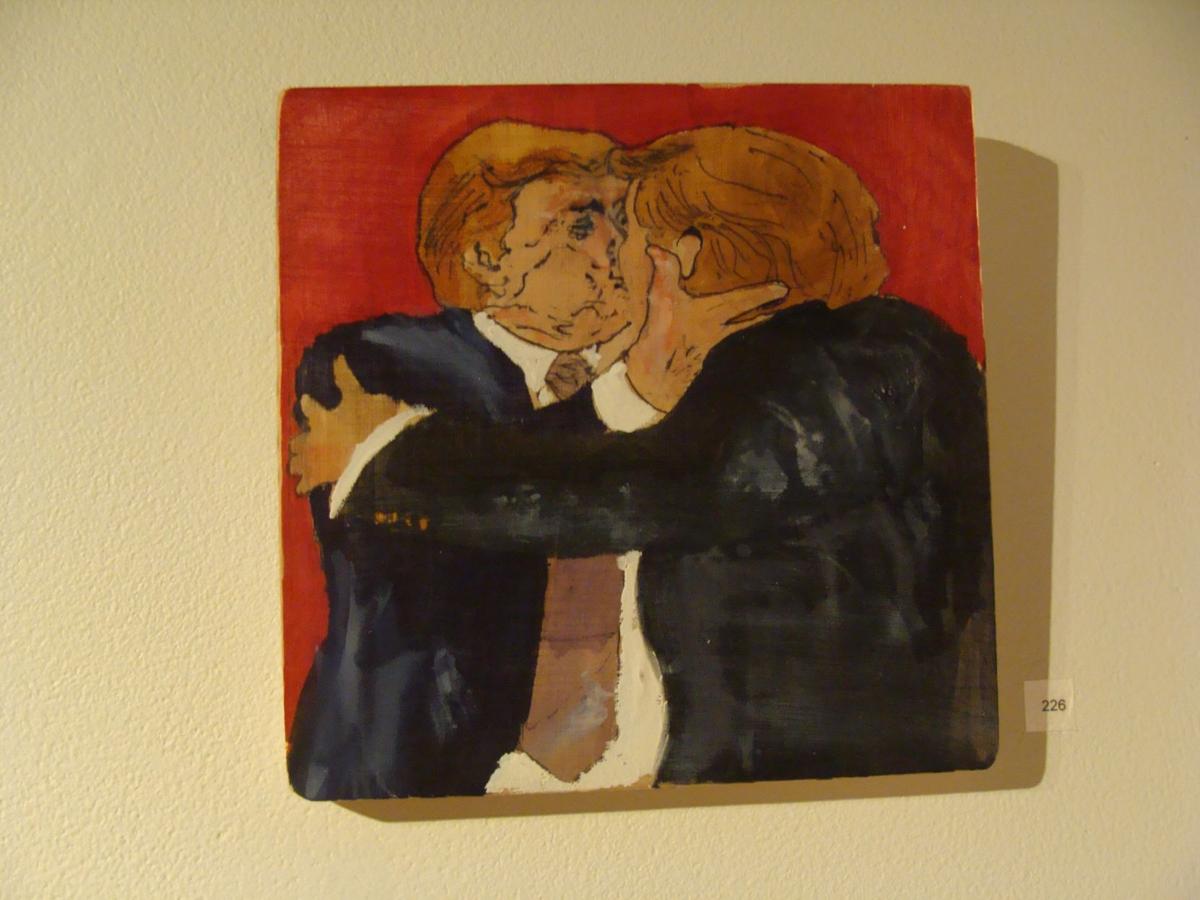 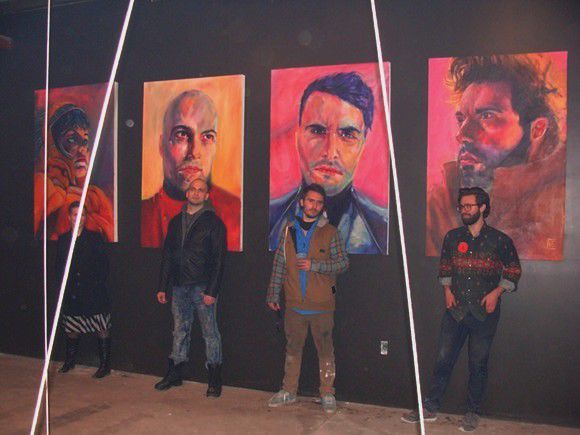 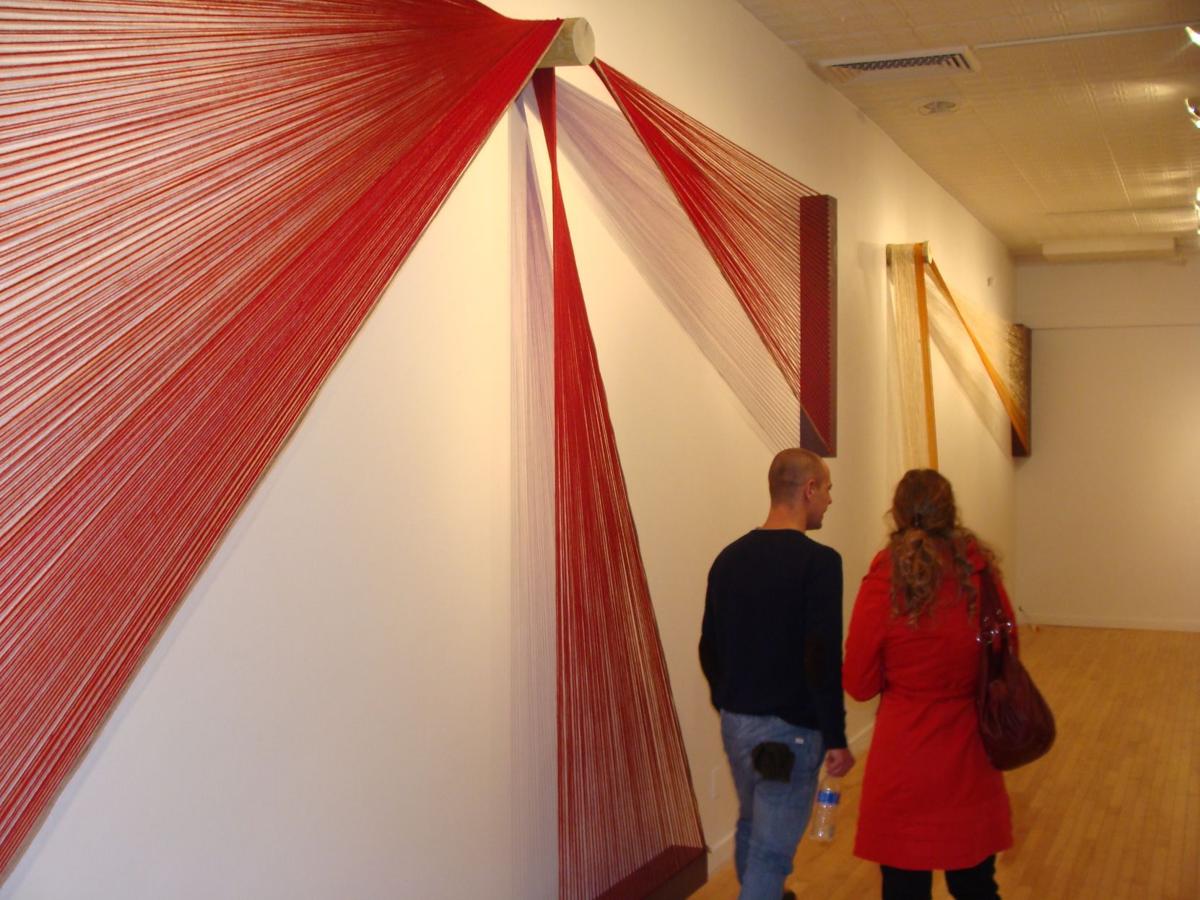 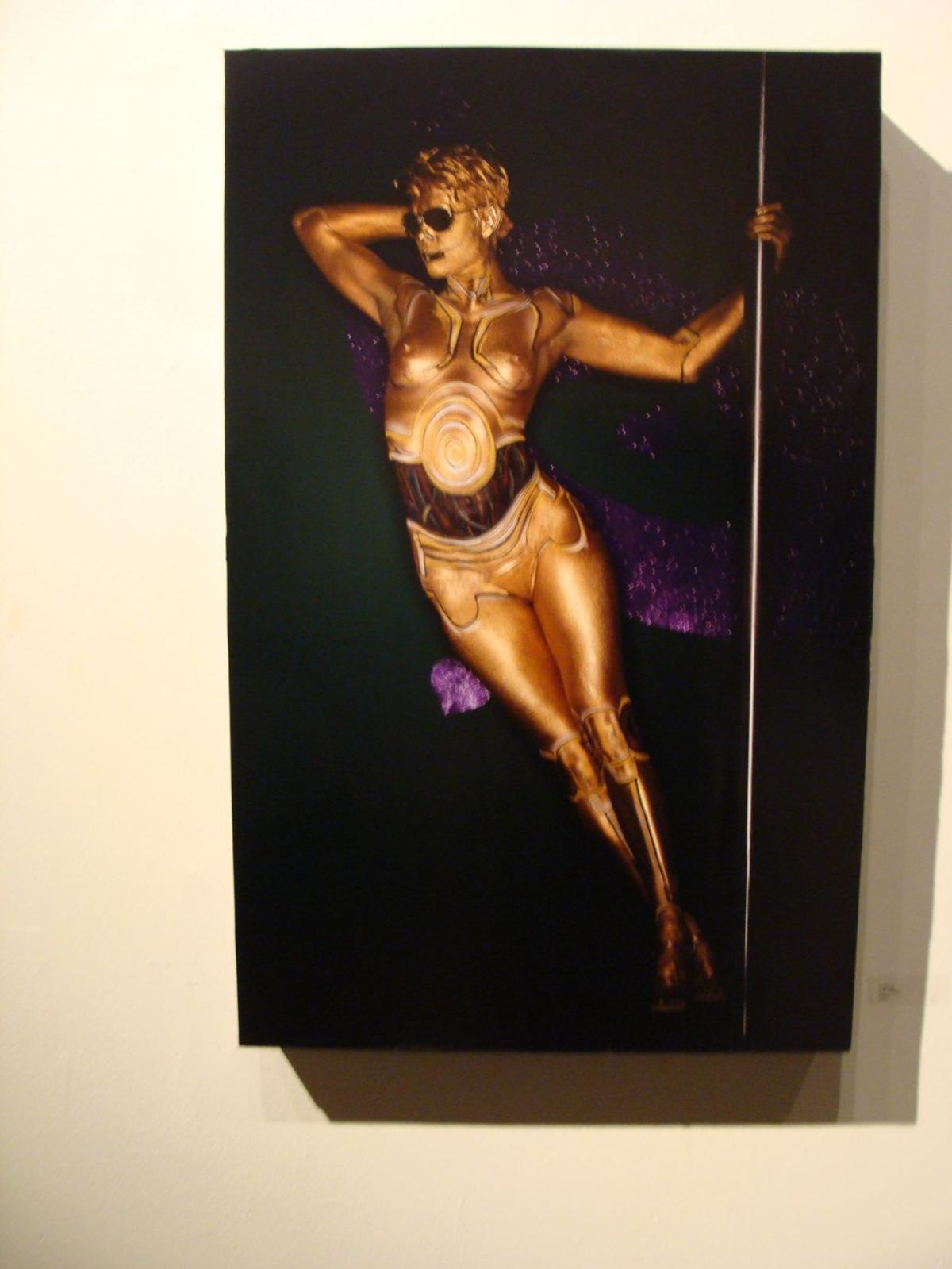 C3P-Oh by Jeff Jeffries
So, with this kind of thing on my mind, I suppose it won’t surprise you that the art that attracted my attention—for better or for worse but usually for the better—was the stuff that kinda bleeds. If if bleeds it leads, as they say, like your morning smartphone news feed.
So when I checked out the Raymond James Stutz Art Gallery during the Stutz Holiday Open House and saw a painting by Julia Zollman Wickes entitled “Moving Forward,” I knew I had to pay a visit to her gallery. The man in the foreground of the composition, in a yellow suit and Panama hat, had his suitcase at his feet. All desert earth tones in the backdrop and the sky was a pastel light blue. He looked like he might have been waiting at some border crossing in the Sonora Desert. Or maybe it wasn’t a crossing but he was waiting on his coyote to bring him (and the people depicted behind him) into the U.S.
Well, there wasn't any blood in this particular painting, but there were certainly life and death issues at stake. Maybe these people depicted will make it across the border, maybe they won't. In any case, I wanted to visit the artist's studio to learn more.
So I went up to Wickes' 3rd story studio (which she shares with her husband Jack, a photographer). There I spotted a painting, still on its easel, spoke to me even more than “Moving Forward.” This painting is entitled “Welcoming Committee,” and portrays two men kneeling, one of them looking through a pair of binoculars. Her style, in both these paintings, champions expressive brushwork over pinpoint figurative detail.
When Wickes put the painting on Instagram she got positive feedback by refugee advocacy groups, “a little before the influx into Europe” she told me.
But when I told her that wasn’t the kind of welcoming committee I’d want to see at the gateway to a new land, or something to that effect, she told me that, for her, there was real ambiguity in the painting.
“I like to have people make up their own stories,” she said.
When I mentioned her toned down palette, apparent in “Welcoming Committee” as well as “Moving Forward.” She told me that travel in Mexico and the Southwest had informed her color choices.
“My palette went from bright to more neutrals,” she said.
I was thinking about checking out some other studios at the Stutz, but I didn’t want to be stuck in neutral as there were many more galleries to see and it was already 5:30 p.m.

Popular posts from this blog

The Art of Making a Life 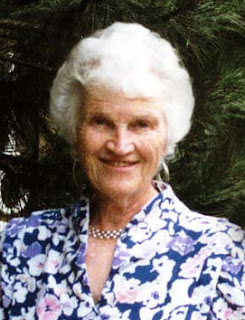 THE ART OF LIVINGWhat kind of life will you make?


Making things.  Self-expression.  Creating solutions.  This is art and it comes to you in many forms.

Most artists can name their "art heroes."

"Art heroes" show us the way -- they offer examples of how to craft an idea, how problems could be solved and sometimes, they show us a completely different approach.

Who gets to define art?  What defines a life well lived?  Those fortunate enough to have had wonderful teachers during their life, look back gratefully at the many examples of a well-crafted life.

This past weekend, family and friends paid tribute to Winifred Wickes, my mother-in-law, who died at age 99 this past year.

From Winifred, her studio was her life and her special gift, her artistry, was her spirit!
By example, she taught that life had many adventures in store and if you were curious, flexible and adventuresome, they came your way.

Grief -- Using the Body for Expression 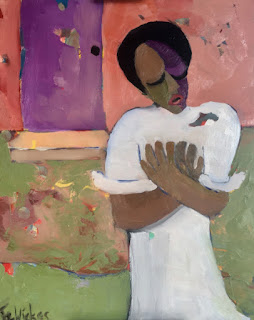 Grief   Using the Body for Expression
The focus of the painting, Grief, is a woman inmourning experiencing a private moment.Her hands protect her broken heart, and holdingherself gives her warmth and comfort.
As far back as medieval times, it was recorded that people used hand gestures to express moods and emotions.Religions adopted blessings using the hands, the legal system uses certain handgestures as a promise of truth and often parents comfort their children with their hands.A gesture can speak for a person when they are unable or forbidden to speak.I believe that these ritualized gestures came from the natural responses toemotions or behaviors.
Oil paint mixed with cold wax allows me to give a softer look to the image.The colors are gentle.
Read more
July 10, 2019 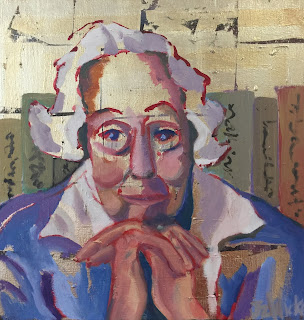 Listening and Looking EverywhereOver the years, I have grown more and more interested in the Southern Writers.  I did not grow up in the South, but my mother tells me that being raised in a southern Indiana town might be similar to living in the South.

Southern novels and the Southern Writers-you may have heard of them - William Faulkner, Walker Percy, Harper Lee, Zora Neal Hurston, Flannery O’Connor, Richard Wright and Eudora Welty, to name a few—are an important part of our country’s literary history.  Some moved out of the South—New York, Europe, Chicago, Detroit—but are still considered part of the Southern Writers.  Wikipedia defnes southern writers as a group of authors who focus on a common Southern history, the significance of family, a sense of community and one's role within it, a sense of justice, the region's dominant religion - Christianity and the burdens and rewards religion often brings, issues of racial tension, land and the promise it brings, a sense of soci…
Read more